Yesterday was a big day in the metroplex. We had a dozen tornadoes reported on the ground. Being at work in the downtown area, I had little clue so much drama was taking place. We DO have floor to ceiling windows on the North and South sides of the building, so I have a good view of the sky most of the day. But as far as I knew yesterday, the weather was the norm for Texas this time of year. Major thunderstorms. Big whoop.

I may have even said “Big whoop” at some point.

Then, I noticed our automatic blinds were closing, which irritated me because it was storming and I like to watch the clouds as they form little puffs or tails. I had just rounded the corner muttering to myself and heading for my boss’ office when one of our IT guys stepped off the elevator and announced, “There’s a tornado on the ground. We need everyone to take shelter.” 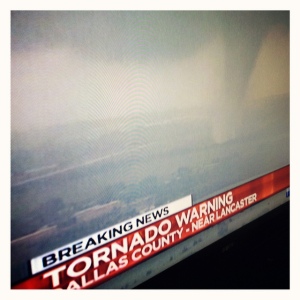 I have not heard these words at work before. I’m in a three-story office building on the edge of the West End in Dallas. Near the highway. A couple of highways. And Reunion Tower. I guess ever since that tornado struck downtown Fort Worth in 2000, tornadoes are cocky enough to pop up anywhere they feel like it.

Wondering why our PA system was a human being rather than a PA system, I followed him around the corner to my work space and listened as he told our side of the office the same thing – and to head for the West stairwell or the break rooms. Now.

Strangely, I grabbed my purse. Then I stood a moment trying to decide which sounded better. Stairs or break room. I made eye contact with the “boss man” who happens to be one of the architects who designed the building. He says, “Break room.” I follow.

A crowd had already gathered. It was just tight enough to bump elbows with people, which from what I hear means it’s a good party. “It’s not a party until your elbow is in someone else’s drink.” See? Like I said.

Standing in the middle of a room during a tornado went against all the training I received as a child in Texas. Even though I was safely away from windows and potentially flying shards of glass, homeless people and debris, it just felt wrong. I know my tornado alley friends can relate. At some point during our academic careers we spent the better part of a day crouched on the floor of the hallway at school, foreheads touching knees and hands covering our heads – like little yoga turtles, while outside the sky turned green.

For a brief moment yesterday as I stood there like Queen Elizabeth, holding my purse on my forearm, I considered getting a Sharpie and writing my name and my “In Case of Emergency” contact on my arm. I also giggled a little when I thought of taping my driver’s license to my chest.

It does not feel like an emergency when you are standing in a crowd of people who are updating their Facebook status (John Doe is “Huddled in a break room with lots of people I work with but barely know – waiting for death, or a coffee, whichever comes first.”) The ability to watch radar images on an Ipad was a new twist to “Storm Watch” for me. Everyone’s screens were very RED.

After about 5-10 minutes we were told to return to our workspaces but be prepared for “round two” any time. I never even realized that in addition to the tornado I heard about in Lancaster – the one with the giant trailers flying through the air – there were many, many more. I contacted my husband and he said he thought they tested the sirens on the first Tuesday of the month, and therefore had pretty much ignored it.

I called my mother, who worries, to tell her I was alive and well and that my employers were keeping us informed.

Me: Hi, mom. Just got out of the break room where they had us huddled.

Mom: You were in a lunch meeting?

Me: No. We were seeking shelter. From the tornadoes.

Mom: There are tornadoes? Are any near Sarah’s school??!
(Sarah, the adorable grandchild who is the first priority. As she should be.)

All in all, over 800 homes were damaged by as many as 12 tornadoes. That’s impressive, even for Texas. Even more impressive – somehow we seem to have escaped without any loss of life. Let’s keep that up this Spring, shall we? 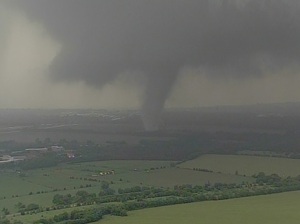 Oh, and in case you were interested, the new drainage system Hubby dug works great. He was wandering around in the backyard during the “siren serenade” a.k.a. “the attack of the viral spirals” yesterday to confirm it.

He may not be that bright, but he’s cute, and his drainage work is impeccable.

4 thoughts on “TORNADO TOWN – DON’T TRY THIS AT HOME”