I live on a semi-busy street, next to a house I refer to as the “My Big Fat Greek Wedding house.”  The day my husband and I pulled up to the curb to grab a flyer out of the “For Sale or Lease” display sign, I glanced up and saw it.  Right there in the neighbor’s yard. A knock-off of a Greek statue. A scantily clad woman in white, mounted atop a concrete block and surrounded by bushes.  She looked a little worse for wear, her arm broken just below the elbow, her nose missing. She looked like she HAD been knocked off – at least once.

As we moved in my husband was urging my stepson, Austin, to gather his friends and knock the statue over. I like to think he was joking. Strangely, my stepson did seem to feel the statue was an affront to good taste.  (This from a teenage boy whose idea of formal attire translates into, “No baseball cap.”)

Well, for someone the temptation was too great. I arrived home from work last week to find the statue lying face down in the neighbor’s yard. My elderly neighbor, Burt, was standing over her, shaking his head in disappointment as though she had gone on a drunken rampage and this was the result. Certainly not the kind of behavior she had exhibited while residing at Burt and Esther’s lake house for 20+ years. This behavior was new and unacceptable.

My husband and I walked over and expressed our concern. We gave a couple of half hearted attempts to lift the fallen goddess, but she was made of sterner stuff than Plaster of Paris. She clears 400 lbs., easy.  A concrete goddess.

There she lay, all week. Face down. Disgraced. Other neighbors strolled by, trying unsuccessfully to disguise their approval. For some, the statue was an eyesore. For others, it was a landmark. I heard more than once –  “How will I find my house without the statue as a reference?”  (Okay, so that was said most often by me.)

This past weekend, a number of men were recruited to wrestle her back to a standing position. I volunteered Austin to assist. After much cursing and crushing of fingers, a level was applied and she was declared acceptable. Barely. A new injury was added to her existing medical history. Her chin was lopped off during the fall – perhaps when she hit the stones that surround the “monument. At least she hadn’t lost her head, which I saw had indeed happened in the past. A large jagged seam circled her throat like a necklace.

The last time she was knocked to the ground was at the hands of a group of SMU frat boys who lived across the street.  We hoped this incident might have been the result of the slab settling and tilting forward, but after attempting to move the goddess myself, I cannot imagine her falling without a good healthy shove.

For our neighbor’s sake, I hope the statue stays upright. Esther considered throwing her away, but we are uncertain how to dispose of a goddess. Even a damaged one. I suggested retirement to the back patio, out of temptation’s way, but the orchestration of that little parade is unfathomable.

The greatest concern is that someone will do this again, and not realizing the weightiness of the situation (literally), may be seriously injured.

So, I suppose the moral of the story is the same as it was in ancient Greece: 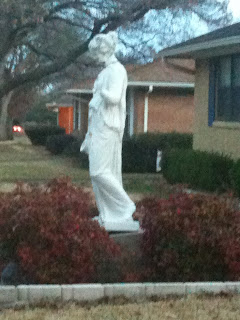