Oh my GOODNESS! I was just glancing back through the London posts to try to remember what we did when. There is NO POST FOR DAY SEVEN! WTF?? I KNOW I wrote about Day 7. It was all about Hampton Court. The all day adventure. Then, the return to the pub (our home away from home) and the late night stroll to Westminster Bridge. This is totally ringing a bell for me, but I see no trace of it on the iPad, or on my laptop. If you read it and it somehow became deleted, then please ignore. Then again, this version may be vastly different from the original. After all, it’s been weeks since we did whatever it was we did. 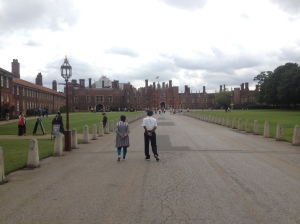 Let’s see. Since we were obviously on the Royal Tour, what with all the castles we’d been in, we HAD to hit Hampton Court. Plus, it’s where Henry VIII lived and where he ordered Catherine Howard’s head to be removed from her body. Like those Barbie doll heads little girls have that you can apply make-up and hairstyles to.

Anywhoo, this was about a 45 minute trip to Hampton Court via Tube and train. We had NO IDEA Hampton Court was as large as it was. OR that it had way too many people living in it at different times. Thomas Wolsey, Henry VIII, William and Mary… There would have been plenty of room for all of them at once, really. The tour was possibly my favorite. No doubt due to Henry. Being in his chapel and knowing that people still worship there today was mind-blowing. Seeing the painting of his family I’d only seen in books was pretty amazing as well. Although if I had been his current wife at the time (which I THINK was Catherine?) I’d have been pretty ticked off that he put his late wife in the painting instead of me.) 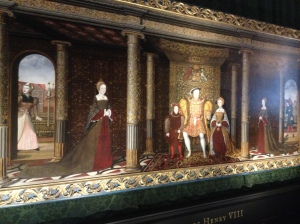 Throughout the tour, in my head, I kept saying, “Henry? Henry? Are you here? Come on, just one little sign. Pretty please?” He is obviously STILL not an accommodating monarch. I had zero goosebumps or shadow visions.

The gardens were gorgeous as well, but my feet weighed about 20 pounds each so I shuffled more than sauntered. Too late, we saw a horse-drawn carriage circling ahead of us as it took the SMART people on a tour of the garden. 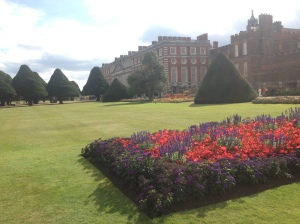 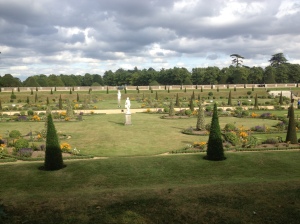 In the evening, we became desperate and daring as time was running out. Sandy wanted photos of Westminster Abbey at night and had convinced me that a ride on the Eye might be the perfect ending to Day 7. One out of two. She took some beautiful shots of Westminster from across the bridge. I took some iPhone images so as to not feel left out. 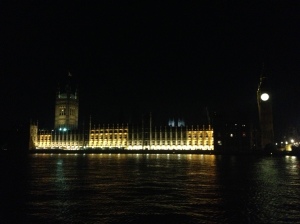 We approached the EYE after that, but it was not accepting riders. It must have been under repair because lots of men were standing around looking at it and scratching their chins. Hey, I may be from out-of-town, but I know what it looks like when a man is hard at work. No matter where he’s from.

And thus ended Day 7. At least, as far as I can remember. I’m sure it also involved a glass of wine, a struggle with the iPad and a feeble attempt to stream photos from my iPhone to the iPad.

Someday I’ll figure out all this technology that is supposed to save us so much time but keeps me awake until after midnight while on vacation. (And then loses my post somehow.)

Now, back to real life and temperatures of 105 degrees.

One thought on “LONDON DAY SEVEN: THE DISAPPEARING POST”