Some things are annoying. The plethora of reality TV shows focused on housewives, for instance. Also, people who can name the finalists on American Idol, but not the vice president of the United States. My husband accuses me of looking for things to annoy myself. That’s possible, but at least I didn’t have to look far – she said with love and a dash of sarcasm.

In all fairness, I believe this list is not particular to my husband, or my stepsons. Now, on to the cattiness. 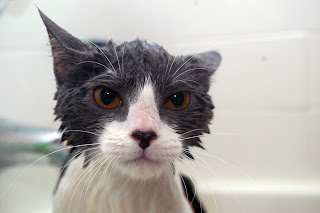 10. The Toilet Seat Saga. This is easy. Although not an actual issue at my house most of the time, I figure it’s a hot topic amongst those with less “toilet trained husbands.” (So to speak.) If I had my ideal, even the toilet lid would be closed. Someone once pointed out, “If you don’t want anyone to look at the picture, don’t put a frame around it.” Amen, sister.

9. The TV Remote is NOT a Right. It’s a Privilege and Should be Used Judiciously. Another gimme. No need to rehash this, right?

8. My Car Stereo is Not Yours. My husband sometimes decides the CDs I regularly have in my changer need to be rotated out. So there I am, driving home from work, irritated, stressed… I reach for the CD player – disk 2, song 6, to blow off a little steam. What happens? A song by a musician I either don’t know or can’t stand blares out of my speakers. I am now even more stressed and irritated than I was a few moments ago. No wonder women have a bad reputation on the road. They are probably all digging through the glove box or under seats looking for their missing CDs.

7. Riding Shotgun with The Bandit. My perfectly normal, pleasant husband (and every guy I ever dated) becomes aggressive behind the wheel. It’s a constant battle to be in front of everyone else. Even approaching a red light, he cannot slow down and fall into line behind the slower car – even if he is turning right at the light. No, he must PASS the slower car, missing the vehicle bumper in front of us by mere inches as he propels us into the coveted lane. I cringe and look out the passenger window, ignoring whatever is happening in front of us and trying to suppress those gasping sounds that are no doubt on HIS list of annoying things women do.

6. Temper-ature. This battle is especially bad…well, all year round. In the winter the comforter is too hot for the man, so he just throws his section to my side. This effectively doubles the comforter covering me, so I wake up drenched in sweat. In the summer, he wants no blanket or comforter at all. However, I, like many women I know, like to have a little “weight” on them when they sleep. Even a light blanket will do. This is impossible to survive when the temperature is 80 degrees and hubby refuses to turn on the AC. The other night our bed was stripped of everything but a sheet. It looked like a prison bunk. I asked if he wanted to confiscate my shoe strings for safety sake.

5. Your Electronics are Screaming at Me. I don’t know when my husband and his children went completely deaf, but they did. For some reason the volume on everything has to be so high the paint is peeling off the walls. I can sit at the other end of the house and hear every word being said on the television. I can turn the volume down from 50+ to 30 or less, and hear everything just fine. And no, it’s not turned up to drown out my complaining. I text my complaints. He reads those because he keeps thinking I might be “sexting” him.

4. Stop Eating My Food. Upon my marriage to their father, my stepsons developed a taste for everything that was “mine.” Suddenly, regular soft drinks weren’t good enough for them. They wanted my caffeine free Dr. Pepper. All of it. They also wanted my favorite cracker, my salt & vinegar chips, and my sorbet. I have to place my favorite items either so low they won’t notice them, or in places they never look, like the Tupperware cabinet. This practice is less successful than you might think. My guess is the dog helps them. I rarely get more than one handful of something before I find the box / wrapper / can in the trash.

3. Kitchen Counter Clutter. The more I move off the main counter and into the office or a less visible counter, the more stuff accumulates. “Gee, Ann, thanks for making room for my bike helmet and gloves and random catalogues. I didn’t know what to do with them, but now I can put them right here where I can find them again in an instant.”

2. The Bedroom is Not a Sports Bar. I’ve known members of both sexes that sleep with a TV on, so it’s not just men. I just think men are less compromising on the subject. I generally don’t want a TV in the bedroom PERIOD. (Unless I am sick, in which case I LOVE the TV.) My husband, on the other hand, apparently had an established habit of falling asleep to the sounds of Old West gunfire, sporting events and screeching tires. This habit was a mystery to me until after our wedding. Now, I have to hold a pillow over my ears and wear a sleep mask to block out the noise / light play. We have 3 other TVs in the house. Watch one of those.

1. Dish-stress. I can’t stand dirty dishes in the sink. This is my mother’s fault. Women pass this gene down just like the shopping or shoe hoarding gene. It’s been more than 7 years and I still haven’t broken my men of this habit. They despise a clean, empty basin. An alarm must go off in their heads the second I load the dishwasher. I will leave the room for 2 minutes and come back to find someone has deposited in my clean sink a knife covered in peanut butter and a glass with milk residue. Shockingly, no one admits responsibility.