My name is Ann and I am addicted to Angry Birds. 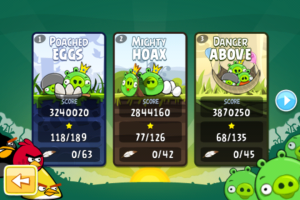 I’m late to the party on this. My brother had already long conquered all the thieving, good for nothing pigs when I first downloaded the free version of the game on my iPhone. It wasn’t long before I upgraded to the full version. And the rest is history.

For those who are unfamiliar (if anyone out there is), Angry Birds is a game in which these cute, crafty, snuffly green pigs have stolen the birds’ eggs from their nests. Now, the birds are understandably angry. The Flock consist of red birds, yellow birds, black birds, blue birds and white birds. As you get further along, a few new additions come into play. There’s a very frustrating boomerang bird, an orange bird that blows up like a balloon, and a big brother bird. Each jumps hopefully into a giant catapult to be launched at the pigs’ fortress in order to squash them. Each bird has its special trajectory and talent for destroying the various parts of the fortress, depending on how you draw back the catapult and aim. 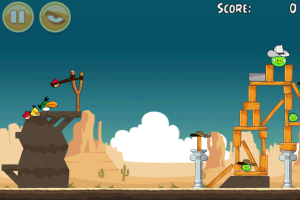 The game has been downloaded 50 million times. No, not by me alone. According to Paul Kendall at The Telegraph, everyone from Dick Cheney to John Hamm are playing. And you don’t need a smart phone for it. It’s available for PC and Mac as well.

Yesterday I played for probably – uhm, way too many hours. I refuse to calculate specifically for fear I will become depressed and launch into a productive frenzy to counteract my wasted Saturday.

I did realize somewhere along the way that my left hand was cramping from holding the phone and I was starting to list to one side from trying to encourage the falling lumber,  steel or rocks to land on just ONE MORE stinkin’ pig.

That technique doesn’t work, by the way.

There’s just something so satisfying about crushing those little green guys and having one or two birds left (who do little celebratory flips, by the way, and shout Wheee!) that makes me indescribably pleased.

The problem is, how am I supposed to answer on Monday when people ask how my weekend was?

“Great! Got stuck on the Birdday Party level 18-2, but think I’ve got that goofy orange bird sorted out now and fully expect to kick butt on Surf and Turf by Tuesday.”

While rolling their eyes. Their little piggy eyes…

I should seek professional help.

And maybe go do some laundry or something constructive.

Just as soon as I get to the next level.

2 thoughts on “ANGRY BIRDS AND THE LOST WEEKEND”