Since superheroes are in the air lately (The Avengers), I started thinking, which is often dangerous, and realized I know enough superheroes to make up my own band of Avengers.

First, there’s The Viscountess – (Not a nickname, but a real Viscountess.) The Viscountess flew thousands of miles back and forth from the UK to Dallas, eventually sitting vigil virtually around the clock at the side of her dearest friend as she lost the battle against breast cancer. The Viscountess acted as protector, keeper of sacred confidences, guard, and eventually as the voice for our Leah when she could no longer speak for herself. This was not a glamorous job, nor was it easy. It took strength, courage and determination. I also believe, had she the power to fly, the Viscountess would have circled the Earth at such a speed as to reverse time. 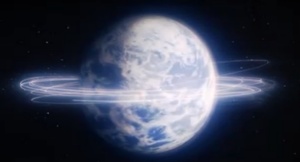 Next, we have The Duchess – (Which IS a nickname.) The Duchess doesn’t even like to be tagged in Facebook status updates.) If you love animals, The Duchess is the superhero for you. The woman has rescued more dogs than I can count. And I don’t mean by adopting them from a pound. I mean, she is driving down the street in her “alter ego” costume – designer suit and heels, when out of the corner of her eye she sees a four-legged furry critter darting through yards and headed directly toward a traffic-heavy street or highway. At this point, The Duchess slams her SUV into park and with superhuman speed, chases down the dog, (in her heels – through rocky terrain, sometimes across fields, and several times through a cemetery.) After snagging the cavorting canine, she contacts the grateful owner, and with a wave of her manicured hand, drives off into the sunset leaving a relieved owner and happy dog behind. Most recently, the rescuee was a 17-year old basset hound – almost completely deaf and blind – that was trotting steadily down the street at dusk. The Duchess admits her superhuman speed wasn’t needed in this case, as Humphrey wasn’t particularly spry, but still… a rescue is a rescue.

(Not actually Humphrey, but she was too busy rescuing to snap a pic.)

My mother is on this hero list. She drives back and forth – over 30 miles each way, at LEAST once a week and often more, while still not 100% recovered from a broken pelvis, to see to the care of her 95+ year-old mother. My aunt and uncle are similarly engaged in witnessing, managing, and trying to somehow ease the winding down of their mother’s life. And as you know, superheroes don’t always work that smoothly together. Even in the best of times. And this is a process that is, as one would imagine, emotionally exhausting, frustrating, sometimes unbearably sad, and underappreciated. At other times, it appears Grandmother must be a superhero herself, who will outlive us all.

I also have a mother-in-law who volunteers at the homeless shelter when she could simply write a check and not get personally involved. My father-in-law does his part by allowing her to smile upon these downtrodden souls. She also tutors kids who probably don’t have anyone at home who cares whether they complete their studies or not.

The littlest superhero of all has been undergoing chemo since January. He is doing well, and the prognosis is as good as it can be, which is a 90%+ chance the villain will not be seen again. While battling cancer he has managed, at the age of three, to master bike riding (sans training wheels), and to maintain his charmingly happy personality.

There are plenty of other superheros I know. In their alter ego existence that are taking the first tentative steps into the caregiver role for aging parents. Others are squaring off against depression, loneliness, health problems, or loss. Thank goodness they have the super powers of optimism, humor, grace under pressure, and loyalty in their arsenal. (Not to mention STYLE.)

If I could, I would have a cape made for each and every one of you. 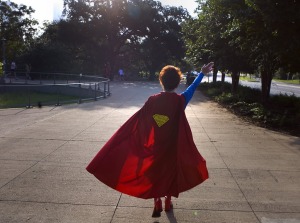