After a slight delay for physical and mental recovery, I am prepared to share the details of the wedding of the year. Amongst those participating we’ve got a bride – the Viscountess, the groom – a Mr. Joy, the Viscountess’ ex-husband – a Spanish Viscount, and his fiancée – Carlos.

(Pausing while everyone catches up. Are we all together after that last sentence? Good.)

How could this event be anything other than fantastic? I was with royalty. Or nobility. Or titled personages. The wedding and reception were themed “The Great Gatsby.” Add in a plethora of lovely ladies, some well-groomed, dapper gentlemen who are suspiciously adept at the theme attire, and you have blog nirvana. 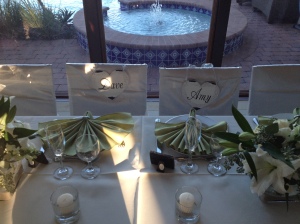 The bride and groom spent the week on Marco Island where they rented a HOUSE. Not some dinky beach bungalow, but an all capital letters HOUSE. 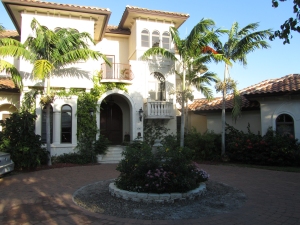 A circular drive caused some dismay and intense maneuvering for The Duchess when we arrived, but no planters or shrubs were damaged, so all-in-all, it was a victory. We ascended the steps to the front doors of the “mansion” and marched inside where we were greeted by friendly faces and a half-dozen beautifully set tables. The scene was perfectly set with an ocean view and pool. It was terribly gorgeous and well done. Another thing that was well done? The number of guests. There were less than 40 of us, including children. It was enough to feel like a real party, yet be intimate. Plus, I could always get near the wine and/or champagne without having to stand in line. (Hey, priorities.) 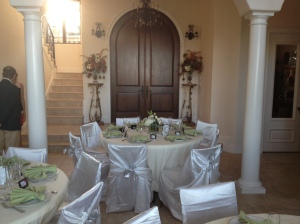 As for the Gatsby theme, my apologies for misjudging the men in a previous post. I assumed they’d be lost regarding attire. I obviously underestimated who we were dealing with. The men embraced the theme from the top of their newsboy caps and Panama hats to the bottom of their wing-tip shoes. These gents were owning it. The ladies were no slouches either with their T-strap heels, faux jewels, boas, beaded headbands and stylish hats. Between the house and the charming attendees, I felt I’d been transported to a movie set. Where’s Robert Redford when you need him? Yes. Robert Redford. No Leonardo DiCaprio for me. 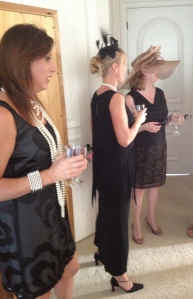 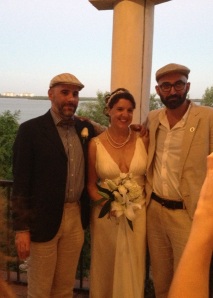 After teetering up the insanely steep stairs to say hello to the bride and her minions, we watched as Amy’s mother fastened the pearls around her neck, and explained, “My husband gave me these. They were from Spain.” 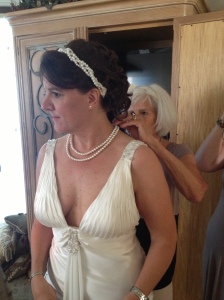 Amy, the minx, quipped, “As was my first husband!”

This is why I adore her. She can take a moment when you are becoming dangerously sentimental and instead make you snort. A much-needed talent, as the group of ladies was swinging from an emotional zipline, careening from laughter and hugs to tears in the blink of an eye. 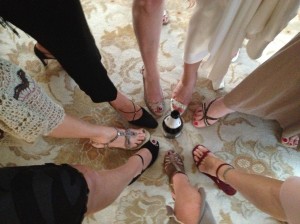 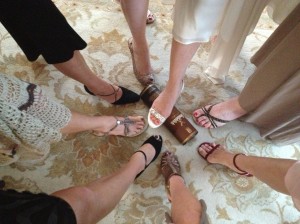 Downstairs, we watched our dazzling Amy approach her smiling groom on the verandah as the sun set. Although the wind had been blustery all day, it seemed to calm remarkably throughout the ceremony. Either the wind actually DID die down, or the obvious affection of the friends who formed a semi-circle around them invoked a protective barrier.

I’m going with protective barrier. I’ve met those people now and I believe if anyone could do it, they could. 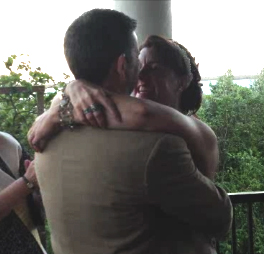 The group in attendance was made up mainly of people Amy has collected throughout her life. (Dave’s turn is coming at a party in the U.K.) I must say, Amy is an excellent friend collector. She does so wisely and with considerable flair. Those people LOVE her. Madly. It was written all over their faces. It was also evident that same brand of fierce devotion has been extended to Dave.

Following the sit-down dinner, Amy’s mother, Liz, stood and explained (quite eloquently) the pattern defining the friendships and family in attendance – from childhood to adolescence, young adulthood, and more recent adventures that revealed how we all fit together – like threads in the weaving of Amy and Dave’s lives. It was lovely. And touching. 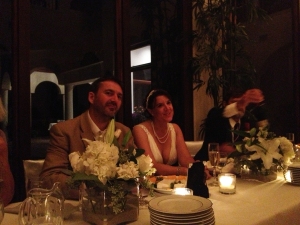 Just when we thought our hearts couldn’t get any more full, the shade of a friend glided into our midst and squeezed our hearts until we thought they’d burst. (Or that we’d become watering pots and have raccoon eyes for the rest of the evening.) It was bittersweet, the realization that if not for certain unpleasant realities, we (The Duchess and I) would have known OF Amy and Dave, but would probably not have accomplished the level of friendship that led to our being guests at the wedding.

But enough of that. As I said, emotions were swinging wildly.

After dinner, the dancing began. I could go on to describe the first dance of Amy and Dave Joy, but as I am not a judge on “Dancing with the Stars” OR “So You Think You Can Dance,” I’ll not offer a description other than to say the guests sighed with pleasure, applauded, then joined in. 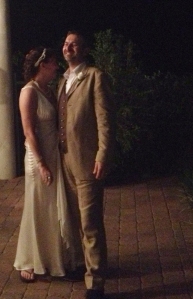 Instead, I offer you the unexpected entertainment for the evening. Leah’s boys, Oliver and Wyatt, had reached the point of exhaustion/excitement that resulted in a break dancing frenzy. Enjoy. (Wyatt and Oliver.)

To Amy and Dave – I wish you every happiness in the world. I cannot tell you how much it meant to be included on your guest list. You’re never getting rid of me now. No, really.

This next part may test the accuracy of my spelling skills, but the important part is, I DID NOT MAKE THIS UP.

Ladies and gentlemen, I give you the Viscountess Magnificant… Joy and husband, Dave. (That’s Mr. and Mrs. Joy, thank you very much.) 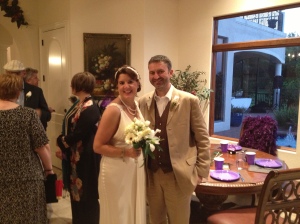 4 thoughts on “A JOY-OUS OCCASION”