Okay, so this is slightly late, so kill me. At least I’m not writing it at Thanksgiving!

For the past three Easters, I spent the Saturday before subjecting myself to what can only be described as one of the circles of hell. I accompany my mother, brother, sister-in-law and my precocious niece to the country club where an Easter egg hunt is held for the children. This is not an occasion for the faint of heart. However, as a PANK (*Profesional Aunt, No Kids), it is my duty and something I look forward to in some twisted way. As you might imagine, the club’s dining room is crawling with children.

Children anticipating candy, while eating candy. A D.J. blasts what I consider completely inappropriate music like, “Thrift Shop”, as 2-4 year olds bounce up and down to the rhythm. Frankly, between the decorations, the cupcake making tables, the screaming, running, and the 6- foot 5-inch easter bunny who bears a striking resemblance to Harvey, I don’t know how anyone comes away sane. 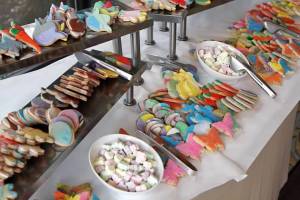 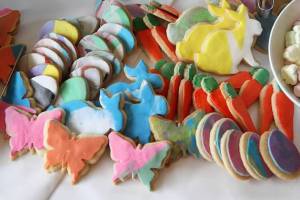 After 3 years I have the survival guide down. Enter room through whatever amazing decor they’ve appointed as the theme – either through a small doorway where you enter the looking-glass with Alice, or down the yellow brick road to join Dorothy and the Wizard. If you haven’t snagged a waiter proffering champagne in less than 30 seconds, you’re toast. The nerve endings behind your eyes start to flare and you’ll have a migraine for the rest of the day.

Champagne in hand, I make my way to the table where my family awaits. My niece waves shyly, then pretends she would rather not know me. Others have tried the same before, but she’s family, so not going to get away with it. It works well, this game of hard-to-get. 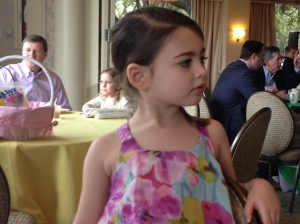 In an effort to win her to my side I stumble to the buffet tripping over small, darting, screeching objects, or children, I suppose, to get to the bacon. I return to the table and wave at my niece. Yes, bacon is her bliss. Just like her aunt.

Now, it’s the countdown to the Easter egg hunt as we look at our watches and stare at the Easter bunny while he poses for pictures. I’m on glass two of mimosa. Believe me, it wasn’t making a dent in the din. Of course there are moments when you look around and see all the children in their cute Easter outfits and can’t help but smile. Then you recall that for every sweet little boy or girl, there’s a wide-eyed maniac ready to knock them to the floor and take their candy. After stepping on their fingers. These little events just help prepare them for what’s coming, I suppose. Toughen up, you in the pastel pink sundress with your ponytails! Your mom just basically gave you handles for a hairstyle. Meet Tommy, who’s going to grab you by one of those and swing you right into a tizzy as he steals your painted eggs.

Before the hunt we visit the petting zoo. One day, I am going to get thrown out because I am going to dress down every parent whose child is lifting baby ducks by the head, nearly stomping on terrorized bunnies and playing tug of war over a lamb. I stand beside the fenced area where I gasp and cover my eyes waiting for something to keel over dead. Possibly me. Parents gather outside the fence taking pictures and chatting as they ignore little Brenda holding onto bunnies back legs as he attempts an escape. Those feet were definitely not lucky for him. “Play dead! Play dead!” I shout above the chaos. 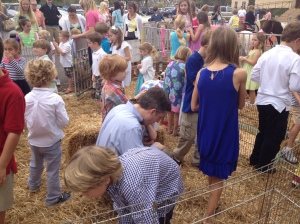 Now, once beside the hunting grounds, I tried to prepare my niece for success – without telling her to knock people down. Instead, I pointed out the eggs that were on the ground immediately in front of the rope where we waited for the “go” sign. Which of THOSE THREE EGGS RIGHT IN FRONT OF YOU are you going to pick up first? I prodded. Those are really nice EGGS RIGHT IN FRONT OF YOU nudge-nudge. I BET YOU CAN GET TO THOSE IN TWO STEPS. Hello? Sarah is nodding, but her eyes are unfocused. Like when I try to point out a squirrel across the yard to Daisy and she stares at my finger instead.

(There, you can barely see me leaning over and coaching. You’ll know me by the champagne flute dangling in my hand.)

Sure enough, the rope dropped and I watched indignantly as Sarah raced past three, four, eight eggs before she heard us and stopped. PICK UP AN EGG! Her mother shouted. EGGS! RIGHT THERE!!! We all echoed, pointing madly in ever direction. LOOK AROUND! Her mother shouted again. I saw a little boy heading her way picking up eggs like an aardvark inhales ants and had to physically turn away in dispair. The three eggs right in front of us sat untouched. Sigh.

Seeing my lovely but directionally challenged niece had a decent collection in her basket by the end, I sauntered to the table set beside the hunting area where glasses and glasses of champagne called my name.

Back inside, I steadied my breathing and stepped once more into the breach. The giant Easter bunny was attempting to avoid a little boy who was determined to whack him in the head. Over and over again. In between polite, yet ineffective avoidance maneuvers, the bunny was giving hugs to the other children. The boy would put one hand on the bunny’s arm to brace himself, then launch into the air, smacking the giant bunny head, causing it to spin sideways or tip. As I watched in dismay, the bunny was stepping closer and closer to two plates that had been left on the ground by other demons, I mean children, whose parents had obviously no understanding of the concept of parenting and had abandoned their duties. After the fifth or sixth time he punched the bunny’s head – I was unable to control myself. I stepped up behind the child (probably 7-years old) and said, “HEY!”

He turned slowly to look at me, his eyes alight with his bunny bonking success. I squinted my eyes at him, doing my best Clint Eastwood in his prime, and shook my head slowly, “Don’t. Do. It. Again.” His eyes widened and he darted off. Quick as a bunny.

Aside from the momentary fear I was about to be assaulted by a bad parent and have a knock down drag out, I was pretty pleased.

I downed the last of my glass and walked off into the noonday sun.

And THAT’S how I rescued the Easter bunny. 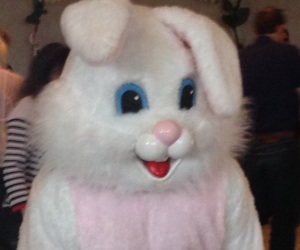 *Reference to PANK does in no way indicate I don’t consider Derek and Austin my kids. I just didn’t get to do this sort of “little kid” thing with them.

4 thoughts on “HOW I RESCUED THE EASTER BUNNY”