We celebrated my maternal grandmother’s 98th birthday the weekend before last. She has been in an assisted living home for… I’m not certain how many years now. Toward the end of that week, she suffered a minor heart attack and was also diagnosed with pneumonia. Not good news.

I was asked by my aunt to go to the hospital one day to sit with her while my aunt ran some errands. While there I decided the medical profession was a joke and that there’s nothing more disturbing than watching a 98-year-old attempt to consume water in the form of a gel. Unless it’s that same 98-year-old trying to consume soup in the form of a gel.

I’m sorry, but I don’t see the sense in denying a 98-year-old anything she wants. She’s earned it. Especially since she still had the good sense to push it away and say, “Yuck.” I couldn’t have said it better myself. Within a few more days she was asking for her clothes so she could go home.

As requested, Grandmother returned to her room at the assisted living home earlier this week and was placed in the care of hospice. She would rally for short periods of time, then be unresponsive. On Thursday afternoon, she passed away under the loving watch of her three children.

These are a few of my favorite Grandmother moments remembered over the past week.

The neighborhood where she lived for many years after my Grandfather’s death definitely took a turn for the worse. Regardless, she insisted on wearing her fur coat and sparkly jewelry to go grocery shopping, despite our warnings that she was going to be conked on the head and stripped of that mink.

One of my earliest memories was of being at Grandmother and Grandaddy’s house – I must have been maybe three or four years old. Instead of a snack of popcorn or potato chips, I recall wandering about the house, a thick red parfait glass filled with little cold cocktail shrimp in my hands. It seemed perfectly normal at the time. So, thanks, Grandmother, for introducing me to shrimp cocktail as early as possible.

I remember holidays at the house where my mom, aunt and uncle were raised. The dining room was adjacent to the large kitchen and it seemed Grandmother would sit for possibly 10 seconds before someone asked for something, or she wanted to check on something and up she’d pop. I doubt that she ever ate a warm meal. In fact, during the dawn of the home video camera, my uncle set up a tripod and camera at the far end of the room so we could play the video back and show Grandmother how often she was popping up and down.

Speaking of holidays, I also remember all the women in that kitchen, peeling potatoes, mixing the stuffing, stopping then unstopping the kitchen sink… Drinking wine or Cold Duck. At halftime, everyone would head to the front yard where a family football game was played. What we lacked in style we made up for in enthusiasm.

What else? Jewelry. Desserts. The time she became a gun owner and we were all afraid to approach the house and absolutely certain the mailman was going to meet his maker. The dark, dark hair she insisted on maintaining until the very end. The outrageous things she’d say. “He’s as dumb and blank as any old billy goat you ever tried to talk to.” I also remember the unfortunate thing she said at my wedding shower that resulted in all my friends standing in unison and making their way to the bar where they stifled laughter and thrilled at the ribbing they were going to give me once we were unsupervised. Then there was the late-in-life introduction to chocolate liqueur.

Complaining. Lord, could she complain! I was quite young when I learned that if we went to a restaurant with Grandmother, a change of tables (at least once) was inevitable.

“There’s cold air blowing down my neck,” Grandmother would say as she eyed the ceiling.

“No, no,” she’d delicately shiver and adjust her chair.

“We can move. It’s okay.” Everyone at the table was suddenly in dire need of flagging down the waiter before the situation escalated.

Even though we knew better, we would wait the prerequisite 5 minutes.

Grandmother would suddenly cringe and look toward the ceiling. “I think we are right under the speaker. I can’t hear anything over that terrible music.”

Frantically, we would spin in our chairs as though the restaurant was on fire and we needed to spot an exit.

“We should move,” someone would insist again, rising half way out of their chair.

“No, no. Maybe if they could just turn down the music. And the air.”

Eventually, a move would take place. Within minutes though, it was clear we were now near a loud group, were too close to the kitchen, in a busy pathway, or the table was sticky and/or wet. I felt pity for the nervously trembling waiter who was so intimidated he could no longer manage to pour a glass of water for her without it overflowing. Nor could he deliver a basket of warm bread to the table. All of these flaws would be sighed over and commented upon with a sad shake of her head. Not directly said to the waiter, mind you, but to her table mates, in the presence of the waiter, as though he didn’t exist or was stone deaf.

Good times. I didn’t realize how much I missed that until now.

She was beautiful. She was caring. She liked things that sparkled. She preferred Cold Duck to Moët Chandon. She delighted in saying outrageous things and pretending she had no idea why we were all reacting the way we were. She liked to stir things up. She suffered years of sleepless nights as she worried about every single one of her children and grandchildren (not to mention their spouses), whether they needed worrying about or not.

She was the child of dirt farmers, married a good, hard-working man, then found herself circling the dance floor of the Country Club and behind the wheel of a new Cadillac every year. Often yellow. 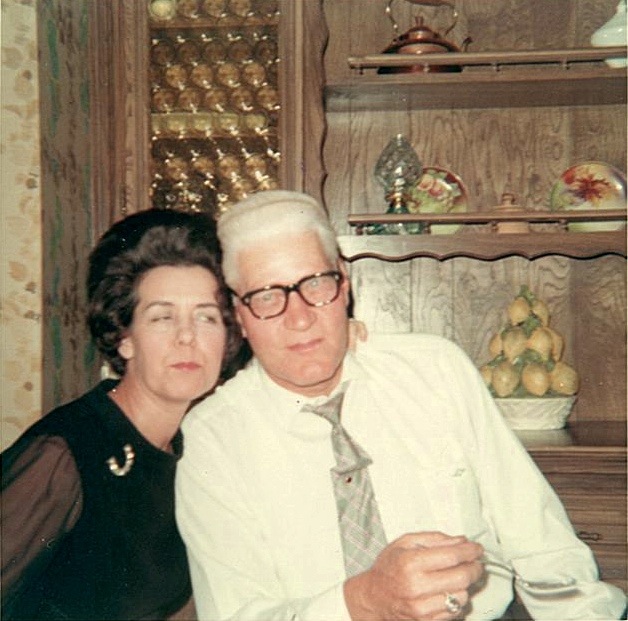 She was The Grandmother.

4 thoughts on “98 YEARS OF ELIZABETH”